A 1982 to Present Day Historical Chronology of Cocaine Anonymous®
Compiled from the WS Conference, WSBT, and WSOB Minutes and other archival documents by C.A. World Services Archive Committee.

In November 1982, Johnny S. receives a call from Tom K. from the Motion Picture Health & Welfare Fund in Hollywood, California, who plans to start an AA Meeting for drug addicts, especially cocaine addicts. “In those days, you could go to AA meetings and if you talked about drugs, they asked you to leave.” (1990). (Source: History of C.A. with Johnny S. & Ray G. 5-26-90 6th C.A. World Service Convention—Phoenix, AZ, Cassette Recording No. 10525, Phoenix, Arizona: Coast to Coast.)

Tuesday, November 16, 1982, about 20 people show up at a new meeting Tuesday evening call the “Whatever” meeting at the Motion Picture Health and Welfare Fund building. Someone suggests a vote be taken to change this A.A. meeting to a Cocaine Anonymous meeting, but the suggestion is voted down. Johnny S. and several other attendees at the meeting decide to start a Thursday night and to call it Cocaine Anonymous. (1990). (Source: History of C.A. with Johnny S. & Ray G. 5-26-90 6th C.A. World Service Convention—Phoenix, AZ, Cassette Recording No. 10525, Phoenix, Arizona: Coast to Coast.)

Thursday, November 18, 1982, The first meeting of C.A. is held on Thursday, November 18, 1982, at the Motion Picture Health and Welfare Fund building at 335 North La Brea in Hollywood (North of Beverly Blvd.), California. Veronica Jo K. is the secretary and calls the meeting to order with a gavel and announces: “Welcome to the first meeting of Cocaine Anonymous, a fellowship of men and women who share their experience, strength, and hope with each other and help others recover from their addiction.” (1990). (Source: History of C.A. with Johnny S. & Ray G. 5-26-90 6th C.A. World Service Convention—Phoenix, AZ, Cassette Recording No. 10525, Phoenix, Arizona: Coast to Coast.) Within 30 days, five more C.A. meetings were established.

February 1983 – The secretaries of the six C.A. meetings got together and formed what eventually became the first General Services Organization. (Source: CAWS NewsGram, Vol. 1, No.2., pg 4. July/August 1987)

May 5, 1983 – Inception date for Chicago C.A. (Source: WSBT Minutes, Sept. 27-28, 1986 ) “One day we (CALA) received a package from Chicago – a piece of literature called, To the Newcomer, that they wanted to suggest that we adopt…it was magnificent.” This is C.A.’s first piece of literature.

November 23, 1983. – Gil M. orders 1500 chips. They will be available through the General Services Office for $2.50 per chip. Gil will be responsible for sales. (Minutes C.A. General Services Meeting, November 23, 1983) C.A. chips (30 days, 60 days, 90 days, 6 months, 9 months, 1 year, 2 years — there was no ‘newcomer’ or 18 month chip) were square in shape, with the letters “CA” printed on them. It was found that people were using these square chips to chop up cocaine. At this same time, some others Area’s of C.A. (of course none of them had met together yet) had also created chips. Atlanta had chips, Chicago had chips, and Northern California had chips.

The words Hope, Faith and Courage were not the original words for the logo. Originally, the words were going to be “Hope, Faith and Willingness.” They wanted to put these words into the circle around C.A., but the word Willingness wouldn’t fit. Johnny Segal, a founding member, was listening to a speech by John F. Kennedy about having courage to do difficult things in your life. Johnny felt the word Courage would fit in the circle, and would be appropriate. The members at the time voted for this logo.

May 3,4,5, 1985, 1st World Convention: Seaside Unity & Acceptance, Santa Barbara, C.A.. In 1985 it was decided to have the first convention of C.A. Fellowships to be held in Santa Barbara California. Members from C.A. meetings from across the United States attended. It was an incredibly exciting event. During the convention, a three-hour business meeting was held to let the fellowships know what the fledgling World Service organization was doing. It was decided the next year to have the first World Service Conference. (Bob Lemon – C.A. History)

June 27, 1985, The official Cocaine Anonymous World Services Board of Directors meeting of June 27th, 1985, was called to order by Willie O. at 8:12. Board members in attendance were: Willie, Ray, Laurence, Neil, Robert, Richard, Jennifer and Michael. The minutes of the previous meeting were read by Micheal. (Source: CAWS Inc., June 27, 1985. WS Board of Directors Meeting Minutes. C.A.World Services Inc. 1-2 pp.)

This first Board Trustees were voted on by Ray G. and Johnny S. (The Original Trustees who comprised a self-perpetuating board.)

August 21, 1986 – On a Thursday night, August 21, 1986, the first C.A. meeting outside the United States was held in Montreal, Quebec. About 20 people attended. Dave S. was the speaker and Robert F. was the secretary.

March 21, 22, 1987, 3rd World Services Conference, Woodland Hills, California. At this conference, it came up that there seemed to be an imbalance of our voting procedures. We had 10 voting members of the Office Board, 7 votes on the WSBT, and then delegates. So, it was decided to give the Office Board only 3 votes. They were not happy. And original Office Board left the conference in protest. One member stayed, and became the Conference Chair. His name was Lionel. Shortly after the conference, the WSBT had to appoint an Office Board to replace the walk out members.

March 22, 1987, The C.A. Logo from World Services was ratified by the 3rd World Services Conference. The Conference also approved the use of the San Francisco’s dyes for metal chips for the following year.

April/May 1988 – Trustee Jack P. (Southport, CT) forms a committee of lawyers for the purpose of 1) have a cadre of attorneys to represent C.A. locally and to provide a support group for recovering attorneys. (Source: CAWS NewGram, Vol .1, No. 5, pg 2. April/May 1988)

September 13, 1988, Ann Landers applauds C.A. published by the Chicago Tribune. A letter and reply by Ann Landers in which the author of the letter credits Cocaine Anonymous as essential to her husband’s continuing recovery. Signed it “A True Believer” Ann Landers replied by printing the address and phone number of the WSO. Response was phenomenal: over a 3-day period, Helene H. WSO Chairperson reports receiving over 500 letters of inquiry! (Source: NewsGram, October-December 1988 p.1)

July/August 1989 – Trustee Jack P. spearheads “Enforce It or Lose” campaign whereby C.A. battles to protect copyright privileges. In 1989, a Dr. Baron advertised a C.A. recovery program in Houston, Texas by the name of “C.A. Aftercare.” C.A. had to defend itself by sending communication to Dr. Baron that this was not an organization that had anything to do with C.A. It came to the point where this issue may have had to go to court. But after much communication between our lawyer and Dr. Baron he finally changed the name of his program. (Source: CAWS NewsGram, Vol II., No. 4, pg. 1., July-August 1989)

August 20, 1989. The Literature, Chips and Formats (LCF) Committee’s motion THAT THE WSO BE DIRECTED TO PRODUCE AN 18 MONTH CHIP passed.

August 20, 1989. The LCF Committee’s motion to approve the advisory opinion, “the books alcoholics anonymous and twelve steps and twelve traditions of alcoholics anonymous are two of our most valuable tools of recovery and as such, it is the opinion of cocaine anonymous that meetings should be allowed to have these books available to support members in their recovery” was passed. In addition, The LCF Committee’s motion to AUTHORIZE THE LCF COMMITTEE TO BEGIN WORK ON A C.A. BOOK INCLUDING GATHERING STORIES passed. (Source: Minutes, World Conference, August 20, 1989.)

September 1992 the Trustee Election Committee was formed. Up until this time, it had always been a self-perpetuating board. Now, each Region and a TEC Delegate with a vote, and the WSBT members each had a vote. (Source: 1992 WS Conference Summary of Motions)

October 20, 1994, the domain ca.org was registered.. The site was online shortly thereafter generating a small number of telephone contacts to CAWSO. There was no e-mail address. CA was the first 12-Step Fellowship to have such a web site—NA, AA and Al-Anon all put up sites during the following year.

December 1994, C.A. created its first web site with the home page including a picture of the C.A. “Escape Cocaine” billboard.
Almost immediately, the C.A. office began to receive dozens of emails each day. (Source: NewsGram, 3rd Quarter 1995, Vol. 8, No. 2)

September 1, 1999, Kentucky Area and the Canadian Maritimes Area were ratified by the World Service Conference.

August 30, 2000, Manitoba Area and the Online Service Area were ratified by the 17th World Service Conference.

Due to COVID-19 the was cancelled and rescheduled the following year.

Due to COVID-19 the was cancelled and rescheduled the following year.

(CANCELLED DUE TO COVID-19)

September 1, 2021, China, Indonesia, Wales and West County in the UK were ratified as new C.A. Areas by the 37th World Service Conference.

(CANCELLED DUE TO COVID-19)

August 31, 2022, Sussex and Greece were ratified as new C.A. Areas by the 38th World Service Conference and Southern Colorado was re-consolidated with Colorado Area. 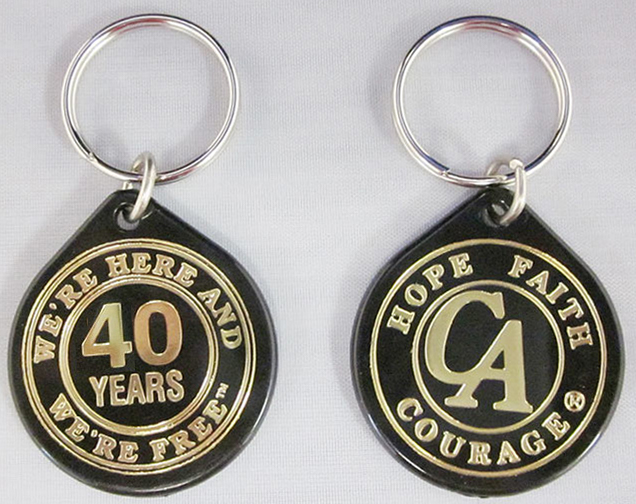